Commander Chris Hadfield – the you tube phenomenon
(sang a version of David Bowie’s “A Space Odyssey” on his guitar, while orbiting the Earth, in the International Space Station) 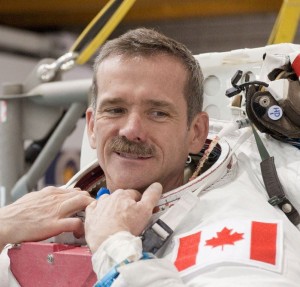 I went along with Giancarlo Facchinetti.
We booked tickets – mainly because Gian has always been into astronomy – plus – along with poet Emma Purshouse, and astrophysicist Professor Trevor Ponman – we have spent the last year working on an Arts Council England funded project called e-x-p-a-n-d-i-n-g : the History of the Universe in 45 minutes; which we perform within a mobile planetarium dome – with the audience on the floor, wearing silent disco headphones, and with 360 degree visuals (Our first 2015 festival bookings are confirmed: March 17th at Birmingham Art and Science Festival, and April 25th and April 26th at Wenlock Poetry Festival) – and we have developed an appetite for science news, space documentaries, books on Space – plus we realised quite how extraordinary it was that such an astronaut had landed on our doorstep…

Anyway – we knew it would be interesting.

He talked about weightlessness, and how odd it was to him when he got back and found that humans only use the bottom 2 metres of any room.

He talked about static electricity, attempting to collect urine samples, the fact that scientists only know what makes up 6 % of the Universe

He described his day (s) on the International Space Station, and his first Space Walk
– including how he felt when he first saw the Earth as he got out of the space station and the sensation when looking at The Northern Lights as it passed between his feet.

He described a very uncomfortable moment when he watched a meteorite burn up in our atmosphere, and realised how fragile his five month home was.

He talked about fear. About training. He demonstrated what he was saying with photos, videos, a boy.
He told us which are his favourite and his worst-ever “space” movies
Oh so much stuff –

but you know what? The best thing was… I thought I was going to be amazed by a man telling me what space was like – and I was.. but he also, somehow, told me just how wonderful life here on Earth is –

Founder of Fair Acre Press, Nadia Kingsley is a poet, flash fiction and short story writer, among other things
View all posts by Nadia →

Next Generation Poets in Birmingham !
David Calcutt talks about one of his poems